One of the first things we did after arriving on the farm was to get a small flock of chickens. Like many other small-holders, we were keen to enjoy fresh, free-range eggs every day. Sadly, our chickens were less enthusiastic about laying them. This was probably due to our ignorance and the diet of maize […]

One of the first things we did after arriving on the farm was to get a small flock of chickens. Like many other small-holders, we were keen to enjoy fresh, free-range eggs every day. Sadly, our chickens were less enthusiastic about laying them. This was probably due to our ignorance and the diet of maize we were providing them with.

Why grow your own chicken food? To lay regularly, chickens need a nutritionally balanced diet, and maize falls a long way short of providing this.

The experts say, too much corn causes a fatty build-up that can cause the chicken to lay less frequently. Furthermore, I’ve since discovered that cracked corn is easier for chickens to digest than the whole corn we were using. Even then, it should only be fed in moderation

Of course, being free-range, our chickens supplement their diets with insects, and a variety of weeds, legumes, and grasses. This was clearly not enough. From 10 hens, we were getting just a couple of eggs a day. This was falling far short of our expectations, and the hens’ normal levels of egg production.

In an effort to increase productivity and introduce a less chemically-dependent and genetically modified feed into our chickens’ lives, we decided to experiment with growing our own chicken food.

How to Grow Food that will Nourish your Chickens

Our first attempt saw us sprouting microgreens out in our greenhouse. This worked relatively well during the summer, but when autumn arrived and the available food dropped, it seemed as though every hungry critter within a mile headed straight for my microgreens. Field mice started decimating everything I planted and, anything they left behind, was quickly consumed by birds.

I decided a new approach was needed.

Exchanging my seed trays for glass jars, I drilled a few holes in their lids and set to work. 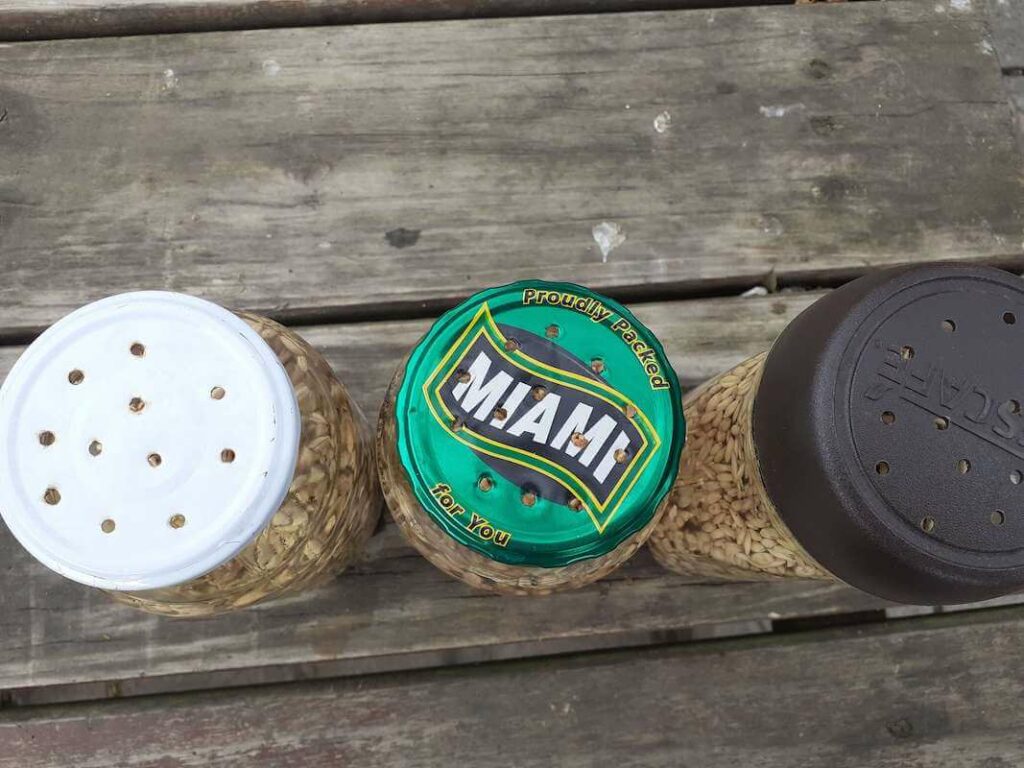 Using lentils, mung beans, barley, and wheat for my first experiment, I poured the dry seed into each jar, ensuring they were no more than a third full. I soon learned that, as the seeds begin to germinate, they expand and, if packed too tightly, shrivel up and die. 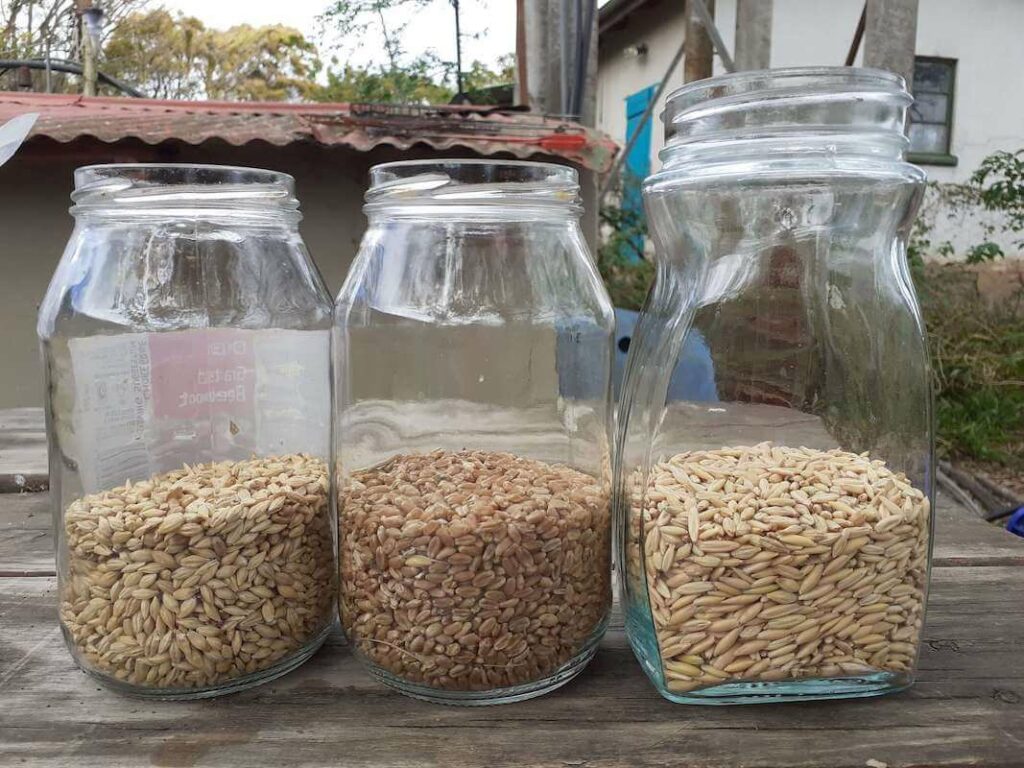 Once the seeds were in place, I added water until the jars were three-quarters full. 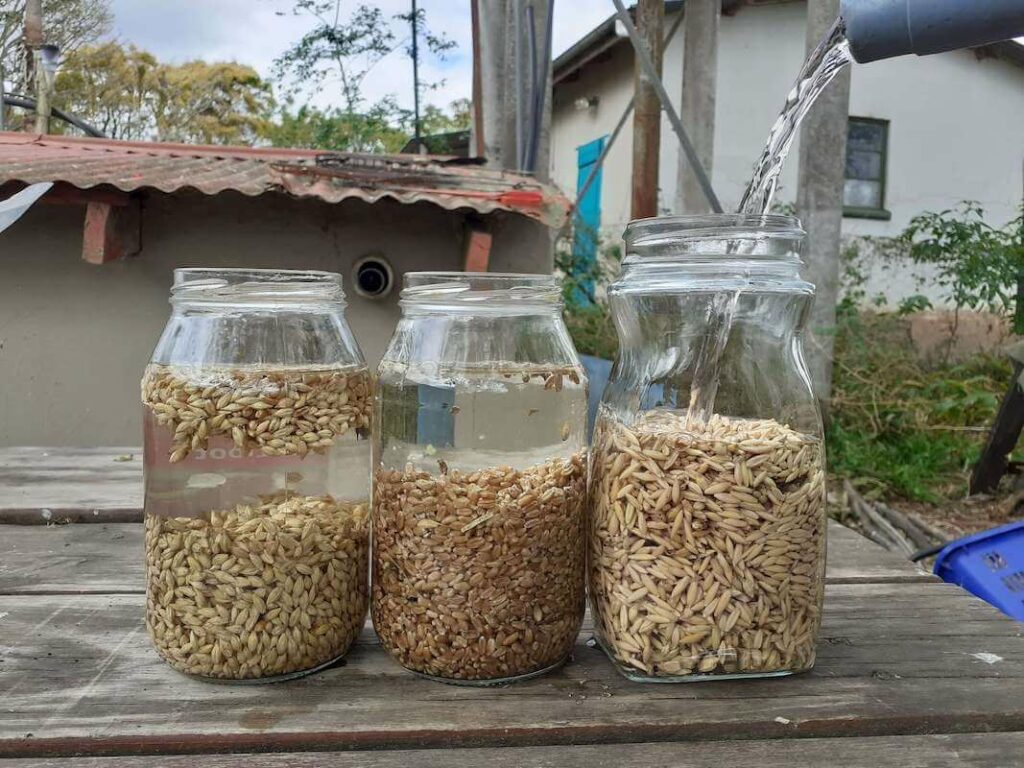 I then left the jars on a windowsill overnight. The next morning, I drained the water, rinsing the seeds thoroughly to prevent any bacterial growth.

Rinsing the seeds every day, I soon saw the first roots popping out like little grains of rice. A day or two later, the first green shoots appeared, telling me my sprouts were ready to be harvested.

I mixed the sprouts in with some dry seed that we’d bought to replace the maize and headed out to the coop. Although a little skeptical about the new menu initially, my chickens were soon tucking into their feed as if they hadn’t seen food for a month. I guess, in some respects, they hadn’t!

The Best Seeds To Sprout For Chickens and Ducks

I’ve since experimented with various different seeds and pulses. Larger beans, like kidney and butter beans, are more challenging to germinate than smaller ones. I’ve found the following all work well and appeal to both chickens and our small flock of Indian Runner ducks:

Within a week or two of being on their new diet, my chickens’ productivity soared. Instead of getting a couple of eggs a day, we were now getting as many as seven! We even had enough that we could sell the excess at the local market. Our ducks also started laying more regularly, even though their eggs proved just as difficult to find as they were before!

Growing your own chicken food gives you an affordable way to give your flock diversity in their diet, boost their immune systems, and give them some of the essential vitamins and minerals that commercial feeds often lack.

Sprouted seeds are also full of chlorophyll and beta-carotene, which help our girls produce eggs with darker, tastier yolks.

Different seeds have different benefits for your hens, Wheatgrass, for instance, boosts the immune system,  regulates blood sugar levels, and oxygenates the blood. Barley, on the other hand, is difficult to digest unless sprouted. Once it is, however, it becomes highly digestible and reduces the need for supplemental phosphorus.

While sprouting is a great way to boost the health of your flock, combing those sprouts with fermented feed “creates a powerhouse of nutrition.”

How To Ferment Feed For Ducks and Chickens

Fermenting the same seeds you use for sprouting is very easy and hugely beneficial for your chickens and ducks. A study published in the African Journal of Biotechnology in 2009 states, “greatly improves the bioavailability of vitamins and minerals during digestion.”

Fermenting seeds is even easier than sprouting them as you don’t need to drill holes in the lids and the seeds don’t need rinsing every day.

To ferment your seeds:

One jar of fermented seeds, plus two of sprouts can provide a nutritional feed supplement for up to 20 birds, although you may need to add extra grain during the winter months. When this is necessary, we use a combination of dried seeds that includes barley, millet, oats, sunflower seeds, sorghum, and wheatgrass.

Sprouting and fermenting seeds for your chickens boosts their nutritional intake without elevating your feed costs. It also means you can avoid genetically modified grains, like maize or corn, and minimize the number of chemicals your chickens consume in the way of residual pesticides.

The Benefits of Oregano Oil and How to Make It →